Location
On the road, NSW Hi Nightjar,
Just wanted to know how well the sluice works (and would it work for catching gems as well mainly sapphires) as it seems to be a lot different to what else is around but it would be easy to make with what I have lying around at home. And your bowl setup is different to what others have, water entering at the top and no raised middle section but your picture shows what looks to be a number of sapphires etc, left in the bowl. Just wondering as the site that I have access to has a lot of sapphires and a small amount of gold and the kids enjoy finding the stones and don't quiet have the patience to hunt for the gold specks just yet.

I have now added this to my list of to do's. I always prefer to keep it as simple as possible and when it is cheap to make, even better.

Spiesy said:
Hi all, has anyone commented on roughing up the bowl with fine sandpaper or rubbing sand in by hand? All the plastic pans seem to have a matt finish to them and by roughing the base up would get a better 'grab' of the finer stuff.
I am definitely building one but I think I will use a black oil change type pan cause I am a little colour blind and need the contrast.
Great site and awesome builds
Cheers
Click to expand...

Now for the funnels again has come across a funnel that basic the same size which can be found in this set of 4. and that the 95mm and the 50mm (2 inches) one which you use both to reverse into each other. The angle is almost spot on the diagram of real blue bowl.

Just sharing just in case anyone is after the materials etc.
L

Thank you will definitely be trying this brilliant diy thanks for sharing :Y:

Well now you have gone and done it !!

Setting this to the side it came to my attention.

Being a big DIY fan, at 8.15pm on a Thursday night I picked up miss 13 from her work and headed to a $2 shop to gather parts.
Took all of 4min in the shop, LOL (including two balls of wool for miss 13)

I am taking up the "Blue Bowl Challenge". 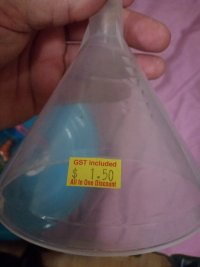 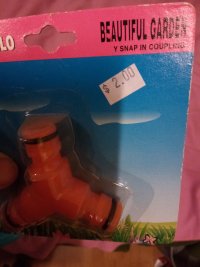 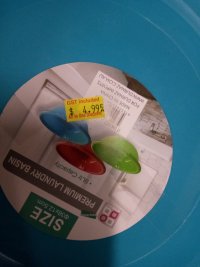 I'm not into gold hunting/detecting, so what use do I have for a Blue Bowl ?
LOL, do I need to have a use ?

Actually I do,
3 years ago the family was in Ballarat at Sovereign Hill (where I suspect we all picked up the Corona Virus) and the girls had not finished panning some dirt from the tourist creek.
So as a good Father I dutifully collected the 'wet dirt' and put it into a takeaway container that came home with us along with a new puppy that the kids had no idea we were picking up from the breeder.
Said 'wet dirt' has been sitting on the kitchen counter now for 3 years. As a good Father I treasure the little things my children do.

(Along with like 60,000,000 shells and rocks, sticks and scraps from anywhere and everywhere) 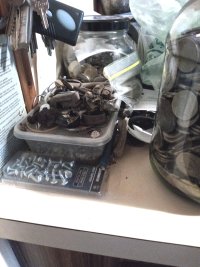 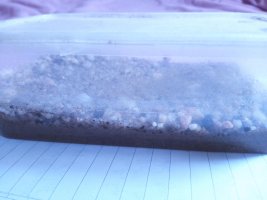 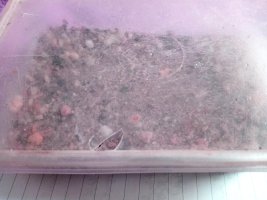 Back to the Blue Bowl... Saturdays task for my kids is to assemble the apparatus, as to the 'plans', learn how to use it, and process the take away container.... AT LAST

I reckon it will be good test material because I know there is fine gold in there, you can see it on the bottom of the container.

So what happened to the puppy ? Did it sit around on the kitchen counter too ?

Golden rule of metallurgists , classify before separating . That is screen your material . You cannot mix up 2m.m. with say 6 m.m . A heavy piece of 2m.m. will be the same as a lighter 6m.m. piece . Savvy ???

Thanks Mike, yeah I did intend to screen the dirt in the tub from Ballarat.

Two weekends now and it is sitting in-front of me, no time with the kids to do it, this weekend for sure !
D

Not sure if I have missed it, but it would be great to see the Blue Pan sluice in action! video? Thanks

try you tube dust to dust ,vids on there to watch,
they are a good investment if you have a reasonable amount of #20 AND #30 mesh size to pan ,the only problem i have with it is after about 4 to 5 hours of keeping a eye on it i tend to get a bit wobbly ,not sure if it's from watching the water spin in a circle or the amount of square bear that is consumed ,i will stay with the water theory
D

Thanks Sand & Surf , whilst i have been a member for a few years, I'm the only one in my tribe that has any inclination to do any prospecting or fossicking. I am due to retire in the next 12 months and would really love to catch the gold fever, here is step one, thanks for your help !

Gold miner said:
As promised, here's how to wack together a copy of a 'Blue Bowl'.
For under $12!! The bowl is quite big, and comes in differant colours, I chose 'Garrett Green' The first thing to do is block up one of the holes in the three way fitting with silastic. (note the adapter I bought has one inch fitting, this is not necessary, it was just 50c cheaper than the three way half inch one!!) Then whilst thats drying, cut the bottom out of the bowl with a grinder. Then cut the spout off the funnel, to give about a 3 inch hole. Now centre the funnell and glue to the bucket. Now you will need a hole saw to cut a 20mm hole in the bowl, about 25mm from the base. OK, now glue the three way fitting in place, with the blocked hole on the inside!! Slightly angle the open hole, downwards.
note here, I stuffed up and was a little rough on the bowl, and cracked it. I have since had a look at my one I built ages ago and the plastic is much stronger than this bowl, even though they are the same. Anyway, it wont affect operation, so I just glued it up. Now get some silastic around the join of the funnel and bowl from the underside. Let the silastic go off and test!! There are plenty of vids on u-toob to show you how to use one, but what I do is put the hose on and fill so the water is just overflowing.
Turn water off, add detergent, add cons, turn water on slowly.
The fines should just start to move.
Turn water up unti you have a definate swirl happening, you will begin to see a fine spiral line of black sand going up the side of the funnel and out.
The fines in the bottom of the bowl will start to form a star shape around the funnel.
I then turn up the water quite high, but not as high to let the water go over the sides of the bowl.
After maybe 5 or 10 minutes, your front lawn will be satisfactorily watered, and you will have just gold, and fine gold too, left in the bowl.
Turn water off, remove hose, and pour into a pan...simple eh?
Click to expand...

Interesting, i ll try to make one. Thx for sharing

"Sniping" for Gold....a rewarding way to cool off in Summer.
2

Some days I should stay in bed.
2