ON The Hustings With Danny13

Cant compete with the gold prospecting guys Grubstake - maybe we could split the competition down to 3 categories .

Danny13 said:
Cant compete with the gold prospecting guys Grubstake - maybe we could split the competition down to 3 categories .
Click to expand...

Take a look what's winning the May voting! https://www.prospectingaustralia.com/threads/may-find-of-month-voting.39473/
1st, 2nd & 3rd for June too & some nice prizes.

Out on the hustings last night with the ctx 3030 and Knox . Target areas were a park undergoing some earthworks and a beach cut . First area hit was the park with my main focus being the ground disturbed by earthworks. The small area produced the bulk of targets for the night including what look like cat ear knuckle dusters and most coinage . Second area was the cut which disappointed except for the 50 dollar note sitting on top of the sand folded as seen in the below pick . There was absolutely no one about and with the tide pushing in I waited around for as long as I could with my headlamp on in case anyone came looking for the note . Eventually a pulled op stumps and headed home with some much needed excercise under me belt . Here are the pics . 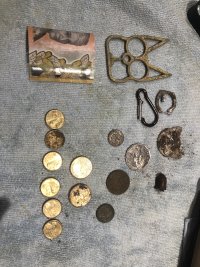 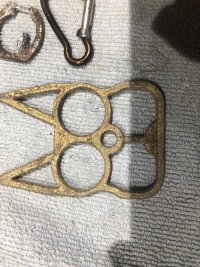 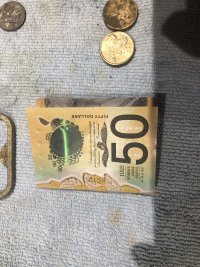 Hit the hustings for a couple of detecting sessions over the last two weekends . Detector used was the ctx 3030 . First session 2 weekends ago lasted about 4 hours and produced exactly a dollar plus change . Just one of those nights I guess .

Last weekend , a new site and new tactic. Decided to keep things simple by gridding tight lines from the swash to dune top . I switched out the ctx battery for the zed for the extra battery life . Used the Large coil was for coverage . Detecting time was about 6 hours . A beautiful evening made for a nice session with the odd target popping up here and there . Keeping tight lines was key with not too much about . Most targets had been taken out to sea with the bad weather a couple of weeks ago.

Even so the occasional target was to be had, and with a couple of detectorist from SA that mozied on down , keen for a chat, I parked up and refuelled on a couple of sandwiches .

Anyways after the chat and sandwiches I hit the grid site and continued on , finding the occasional target to keep interested and then a nice sounding 12:22 popped up at about 10inches on the edge of the swash zone .

With the tide coming in with a bit of swell , it took several attempts to retrieve the target . Glad I did and happy it wasn’t a piece of canslaw . After gridding for 6 hours a nice 10k white gold ring was a nice surprise. And with the ctx getting heavy it was time to pull stumps and head back to the sheds .

Here are the pics , happy hunting .

The ring has now been handed in to the relevant authority .

Injuries and accidents while detecting
2

Gold & Its Association With Ironstone
2 3

H
Looking For Pointers, Areas I Can Legally Detect (Some Finds).

Stepping up from a Go Find, not sure which way to go