Rockhound gave me this stone, which I believe is a Lightning Ridge crystal opal nobby. I know very little about opal. 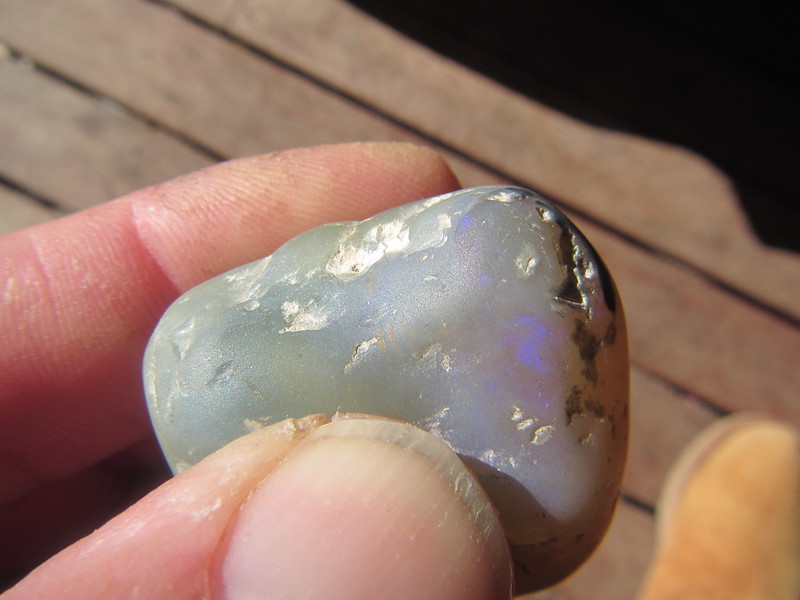 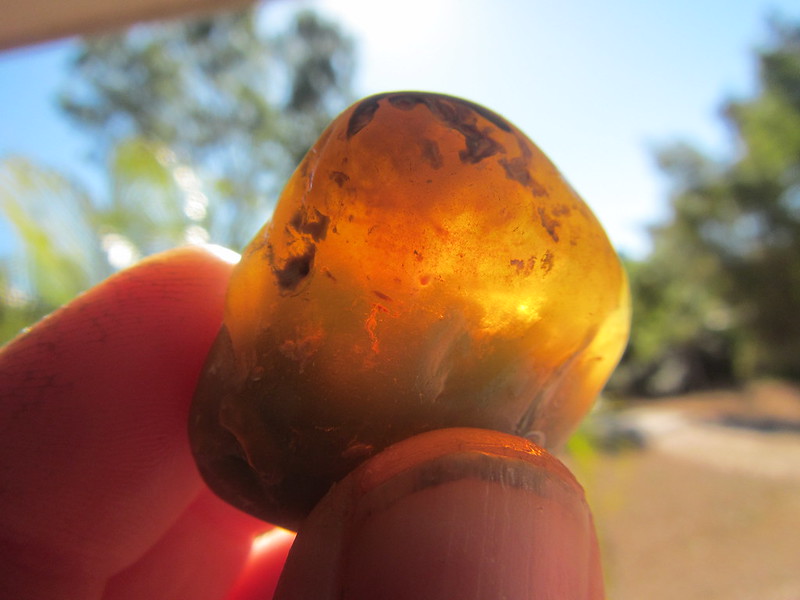 I sawed the dark grey potch off the end and made a cab from that (not shown) so I could get a feel for working with the material. I had always heard that opal is soft and fragile. This stuff was softer than anything I have faceted but it was still surprisingly tougher than I expected when sawing and grinding. I had been under the impression that a saw blade will go through it like a hot knife through butter - not true, it still took a while to get through it. I would still exercise care with this material but it isn't as fragile as I had believed.

I decided to saw about a third off the translucent side, in keeping with the shape. Surprise! I hadn't see that from the surface. 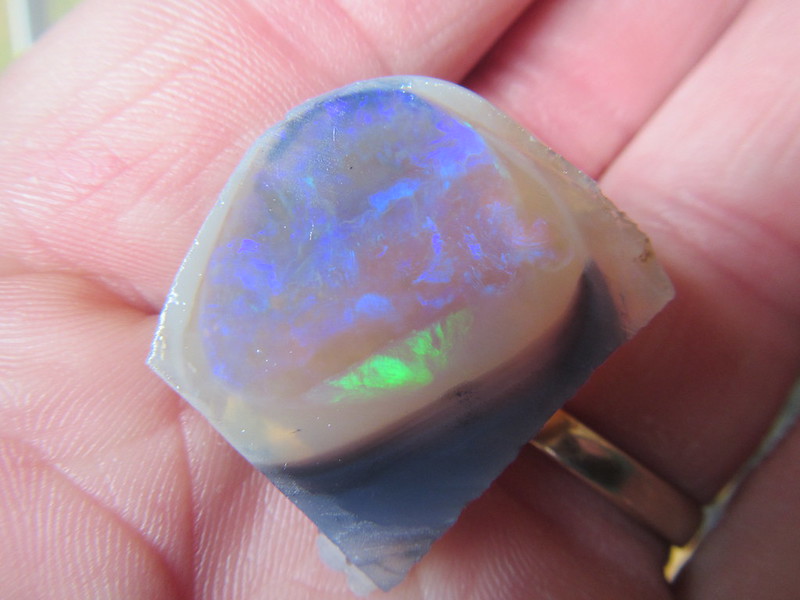 The smaller bit looks much the same so I made a freeform cab from it. The top is what should be the bottom in a normal cab. I kept working it down from the outside skin but when I reached as thin as I was comfortable going, the bottom still looked much more impressive than the top so I made that the top. Unfortunately, that means the edges are bevelled downwards instead of upwards like a normal cab. If I level the edges, a good amount of brightly coloured material would be lost. You wouldn't see that if it were in a bezel setting I guess.

I can see why the black stuff is the most valuable. This stuff looks nice enough but when I put it down on the black workbench top, the colours really came to life! Like nearly all of my photos, these ones can't do the stone justice. The colours are quite a bit brighter and livelier than shown. Predominately a blue-violet but there is a very pretty streak of glittering green down one side and there are sparkles of orange-red through it as well, the camera just can't seem to capture them. 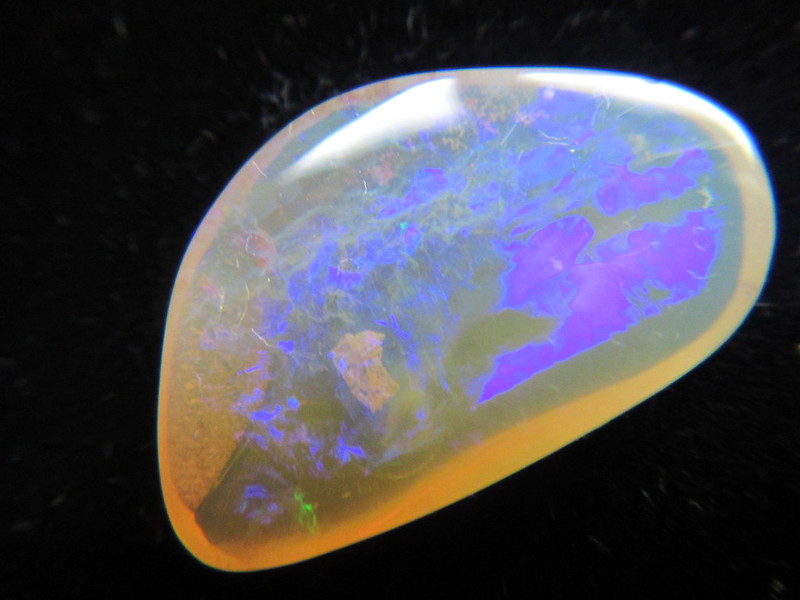 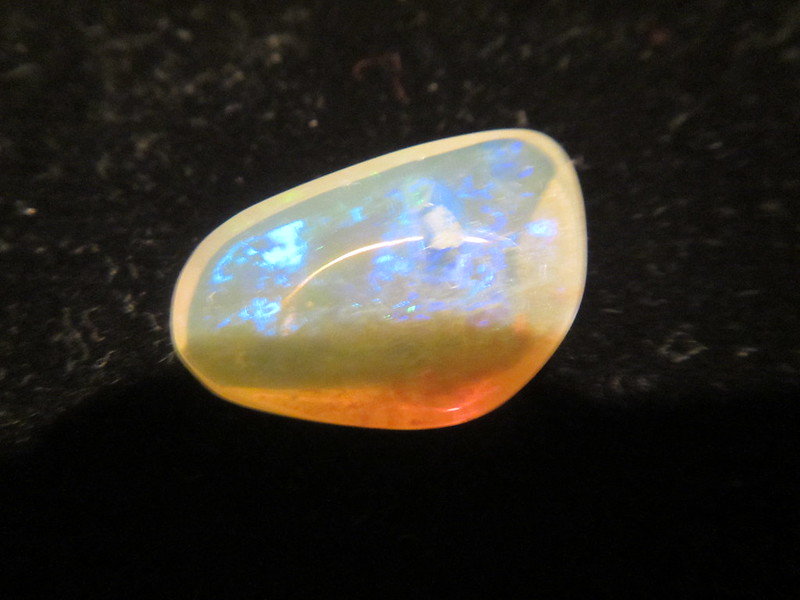 My first bit of opal - I think I'm hooked How could I have ignored our national gemstone for so long?

Throw her into a pendant setting, just a round the outside type one like SA Bogun does with those silver coins ,... I recon that would do it justice, and it would seem different depending on the clothing colours that background it for the lucky wearer. 8)

Yeah, it changes appearance depending on the viewing angle. Hold it up to the light and it's just translucent honey coloured, it's when you look down on it that the colours come to life.

Yep, a bezel pendant setting would really do it Wonder if I should polish a thin slice of black obsidian or onyx to put behind it, the dark background seems to really do it.

Some sheila somewhere makes some sort of coloured glass with properties that reminded me of what you have there in the fact that it would look different in different circumstances, might loose that effectability with a permanent black background, maybe make two, one of each ,.. double happy femme then anyway.

Nice writeup Lefty, looks like you had some fun with some surprising results

Cheers Wally, yeah it surprised the hell out of me.

I have a mate who is a jeweller and former opal miner, I'll ask his advice before doing anything with it. It seems to me that what we want here is the opposite of what we want in a faceted stone. With faceting, we want all light entering through the top to be totally reflected back off the bottom and out the top again, maximum sparkle. But here, I think we want all light that makes it all the way through to the bottom surface of the stone to be absorbed rather than returned so that only the colour layers in the stone return the light back out the top, so they don't have to compete with extra light coming back up off the bottom, which seems to dilute the colours.

But then, I've probably got that wrong Hence, I'll ask first.

Nice work mate, I havnt had a go with any opal at all. Keep it up I know one of my books shows some opal backing techniques

A mate gave me a bag full of those amber opal nobbies a few weeks back, quite keen to get a few of them cabbed. Some are very clear and should come up a treat.

Check em out closely Heatho, there was almost no sign of the colours that were in this one until I sawed it in half. The two stones I got from it are much more colourful than the photos show and the look of them changes with not only the viewing angle but with different types of light and with the time of day.

These ones polished up beautifully with Cerium oxide on a felt buff.

It still feels a bit weird to have the stone dictate the shape 100%, not only the profile but the sides and bottom as well. Both cabs look upside-down to me, the flat top is what should be the bottom. But as I kept working them down, the curved dome just never got to a stage where it looked near as good as the bottom - the very best stuff must have been right in the middle of the nobby and I sawed straight through it. You won't be able to tell in a bezel setting of course.

I was in White Cliffs about 10 years ago and found a golf ball size piece of what I'm told is a partial pineapple. I found it walking the dry creek bed just up from town. It's got a great show of color in the right light. A local told me it was worth between $500 and $1000 dollars.

Between Lefty, Heatho and the rain, it got the better of me and I pulled out an old box of rocks I had as a child. Put it up to the light and the sparkle disappears a good way to spend a wet evening

Looks good Wally. What sort of lap do you polish it on, given that it's a bit on the soft side?

Was surprised how hard the stone was given the folk-law of being soft, the preforming was reasonably fast but slower than I expected to the point that I had good control on the rate of cut.

As the stone is small and I still have my L-plates on the gemmasta, I decided to try cutting a facet on the 3000 on an old lap without recharging it and it worked a treat for control of the cut so I kept with it.

iPad photo just don't do it justice, but from my end, the variance in appearance in different lights has made this exercise a lot of fun.

Currently thinking about how I go about the crown, faceting will be quick and easy but am considering cabbing it, something I havn't done yet.

Yeah - it's really only soft compared to a lot of common faceting stones like quartz, zircon, garnet, topaz, sapphire etc. I would not call it soft per se.

Tried to get some more pics, camera still struggling to show what the eye sees. It's so much more vibrant and colourful than the photos can capture. 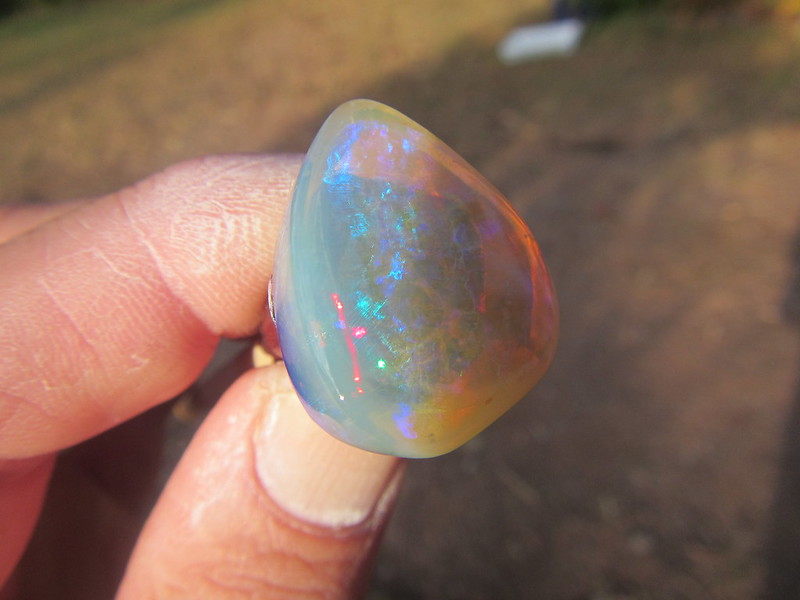 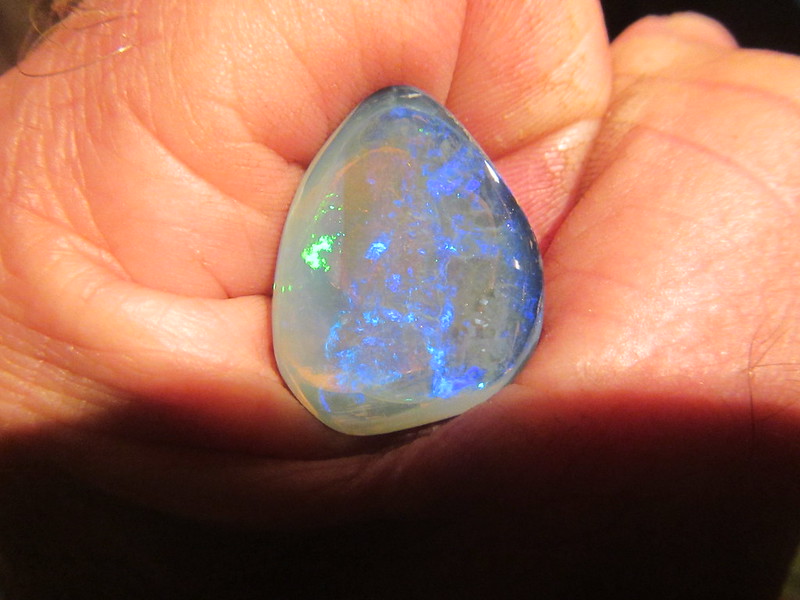 As for being soft , remember its a comparative thing , opal is harder than some metals , bronze for example . So not really that soft

Decided to finish mine off with a minimalist approach, I think I will call it a 'missus cut' as it takes on a different look depending on the lighting and it really doesn't like its photo taken

Ended up being 0.95ct of exploritory cutting with an interesting medium LOL Barney. I put twice the number of cuts in the base than a standard brilliant thinking it would help bounce the light around and tried the larger windows on the crown thinking the opal flecks could look more pronounced.

Hints of honey yellow base stone with blue/purple opalescent flashes. Under a led loupe, it is a inpenatrible mass of electric blue flecks.

Sweet wally Anthony said 45 degree minimum to me . But if there is lots of play with some like I have , I'll go with a skinny double rose cut that will window out yet probably exite the play of colour . We will see I quess . I'm about to do a simple oval at 45 to see what happens . Think the critical angle for opal is 43.68 so if no window is wanted probably want to cut at least a degree above that , so 45 min makes sense .

Injuries and accidents while detecting
2