I've just returned to Adelaide after my most recent trip to Lightning Ridge, NSW, home of Australia's gorgeous Black Opal but also renowned for its beautiful and rare Opalised Fossils for which I am a total sucker/nerd

, and lucky Collector.
Every now and then, maybe every 12 to 18 months, a miner or seller shows me an opalised tooth, usually plesiosaur, sometimes dinosaur or crocodile, and occasionally fish (usually in jawbone, see below**). They are rare and some can be eye-wateringly beautiful, almost glowing in the fire-coal-embers' colours of precious opal. Only once before, circa 2015, has a miner/dealer shown me 2 teeth from the one claim --- but a single tooth is still a major find.
In the mining/washing process they often get damaged or broken, inadvertantly; after all, the miners are looking for precious opal, NOT fossils. All of the opalised fossils found and recovered are accidental finds, by-catch, so to speak. In fact, many miners abandon claims that contain a lot of opalised wood/plant and many other opalised treasures (!!!) because they are not commercially viable

. Very occasionally, an opalised fossil is found (usually by gouging) with excellent preservation and detail. Such specimens are highly-prized (especially overseas) and can be sold for several thousand dollars. However, I am committed to donating these little treasures to the Australian Opal Centre (AOC) in Lightning Ridge, so that they:
--- remain in Australia and are not hidden away in private collections, and
--- will be on display for many generations of visitors/paleontologists in the years ahead.
I never think of them as "mine"; I am just their caretaker until they find a home in the AOC (http://www.australianopalcentre.com/) .

On Monday, 30/05/22, a miner/friend whom I've known for about 6 years showed me a parcel of rough and rubbed nobby mostly-green opal which belonged to a mate of his, containing a bag with --- get this --- not one or two, or even three, but seven opalised teeth

It was a treasure-trove, a mini-Aladdin's Cave and after some spirited haggling I bought the whole parcel, but kept the teeth out for non-commercial reasons.
It was as if all my Christmases had come together, and it gets better.
I asked him if they had been collected over several years --- I had acquired maybe a dozen teeth in 30-odd years, so seven is A LOT, in LRidge terms.
He said and has since confirmed (and I have no reason to doubt him) that they came from one half-claim in one of the smaller Coocoran fields where his mates had been working over the last 3 months, using jackhammer and pick and automatic hoist. All were found in the same opal clay level with some nobbies-with-colour, beneath a steel band and within 15m of each other as they worked along a large Z-fault. Some had gone through the washing process and were broken, ie 5 are only partial teeth, but nevertheless distinctly teeth: 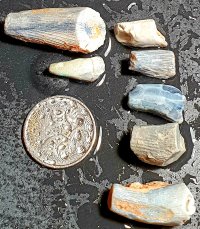 Top left: is the best-preserved, unusually large (17mm long), probably Plesiosaur (freshwater). My guess is it was not washed because the beautiful striations are very clear and undamaged and internal structure is clearly visible at the base. No colour.
Second Top Left: is intriguing. Not clear if it's whole tooth in which case it's likely croc or dino. Has a lovely green bar.
Bottom Right: also probably plesiosaur, has a lovely groove on its side which is either wear-and-tear against another tooth or Caries (tooth decay). No colour.
Top Right: has a hollow core which should help with animal identification. No external striations, but further study under magnification is needed.
After I have donated them, I think the experts will have fun identifying them and I look forward to their conclusions.

My amateur's guesses: well, I'm thinking at least 4 animals, possibly from 3 species. If anyone can help with identification, please post.
I doubt they would have socialised together in such a small area, but might well have been trapped in mud at separate times,
OR
the romantic in me wants to believe that it was the dining-spot of a large predator who dragged its kill to that spot for whatever reason, to eat. Maybe close to its nest, or to feed progeny ...??

Suffice to say, it's very unusual and rare to get a collection of teeth like that from such a small area. Only a veryVERY small % of claims have even a single tooth in them. In acquisition-terms, it would ordinarily have taken me around ten years, give or take, to get together seven opalised teeth.
I'm blown away by their very existence, let alone that I was incredibly lucky enough to be in the right time/place to be shown them. If I had not been there, the whole parcel would have been shown and sold to another buyer and quite possibly left the region forever.

I mentioned above opalised fish teeth/jawbone.
I've been privileged to actually hold 3 opalised fish jawbones. One belonged to a mate of mine (mined in the early 90's, a real beauty!!) which he donated to the AOC: 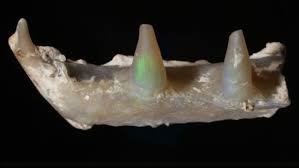 I had another specimen from Allawah Field circa 2017: 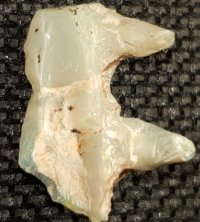 but in October 2020 I hit the metaphorical jackpot.
A bloke I've known for 30 years was working in one of the larger, most productive Coocoran fields and in one small area found a group of grey-potch bones, some of which contain large vertebrae: 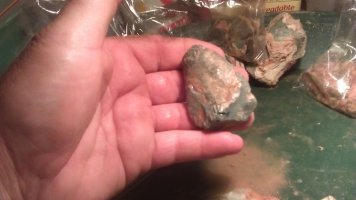 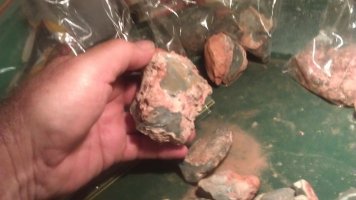 There is a 20-litre bucket about 2/3rds full of ... OPALISED BONES!!
Many are broken but that was due to natural fractures in them which fell apart when released from the host dirt, not a lack of care. It's been speculated that the bones are from more than one animal, possibly dinosaur and plesiosaur, maybe even crocodile ... but wait!

There are also plesiosaur teeth (another in host rock, no photo): 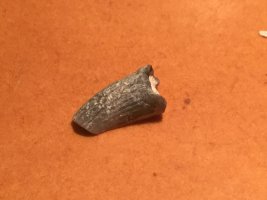 but the icing on the Cretaceous cake is a superb, large fish jawbone in black potch, 4 contiguous pieces, showing thirteen teeth/sockets and two teeth intact but damaged (since he only spotted them after they'd been washed in a large agitator) ---

It's 77mm long; the sides range from 10 to 17mm front to back and the average width would be around 10mm.
It's incomplete, therefore would be longer irl, maybe as much as 100-110mm, but I'll leave that to the experts. With a 10cm jawbone, that's a bigBIG fish

, probably a predator like a PIKE, BARRACOUDA or Spanish Mackerel, but freshwater. It's been suggested to me (but yet unproven) that it's the largest opalised fish jawbone, and therefore fish, ever found in the Lightning Ridge region. It also says something about the size of the stream/river/billabong it lived in. Such a large fish could only grow in a large body of water and might well have come from the South-East edge of the larger inland (Eromanga/Cretaceous) sea into a freshwater tributary, to spawn.
Sitting here typing, I am in respectful, unnerved awe of the amount and variety of opalised fossils found by my mate in this one place --- animal bones, plesiosaur teeth, a huge fish, even a large black mussel shell, 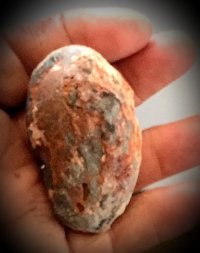 all of which I will donate to the AOC later this year (I have the whole parcel, nobbies, opalised wood, rough and rubs and fossils) --- and the incredible luck involved in their formation and discovery.
I am mindful too that I did not "find" them.
Hard-working, tough opal miners searching for gem opal found them, completely by accident, and a wild set of sliding-door-accidents have brought them to me, for a while. Having them temporarily in my "possession" is thrilling, but they belong to Australia and will remain in Lightning Ridge, the fabulous Ridge, where they belong.

Love your work buddy. Thankyou for being willing to preserve them for all to see in the AOC! Maybe one day I'll get there and see them, I hope!
F

Rusty_G said:
Love your work buddy. Thankyou for being willing to preserve them for all to see in the AOC! Maybe one day I'll get there and see them, I hope!
Click to expand...

Thank you, mate.
Driving there and back from Adelaide at my age is 'work', for sure.
Some of the cutting is, too.

However, I get the singular pleasure of people bringing me rocks to look at, sometimes eye-wateringly beautiful rocks, and I look at them happily whether I buy them or not. My appetite for looking at opal is insatiable. I love buying even a lowly bucket of potch'n'colour which can take me days to go through, piece by piece, totally absorbed.
Every trip, I meet new people and hear new stories.
Every trip, I see something I've never seen before (eg those seven teeth).
Every trip, I learn something new and have some new adventure.

I love what I do, and it rarely feels like work.