Some time ago, among other purchases of rough and rubbed opal parcels, there was a small, old and dusty bag of bits'n'pieces which had been gleaned over months from several jars of miscellaneous opal specimens bought here and there in and around Lightning Ridge. The previous owner had saved up that bag of what he thought were opalised fossils and given them to a "runner" (someone who sells on consignment) who showed them to me, knowing my fascination with opalised fossils.
I was not much interested

.
The pieces looked dry, dirty and daggy --- nothing special --- but there was one obvious bone piece of grey-skinned black and amber potch that I could see and not much else. I reasoned that single piece was worth what he wanted for the bag, so I bought it for that piece then put it away. This is it, prior to cleaning: 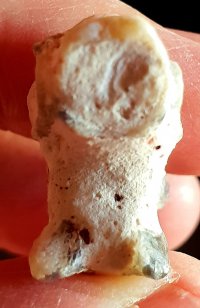 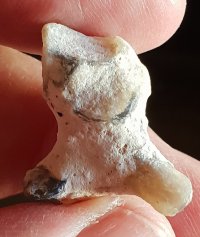 Slightly damaged, but nice little spess. Here it is after professional cleaning, involving fine work with a tungsten-tipped-home-made bit, followed by blasting with sodium bicarbonate: 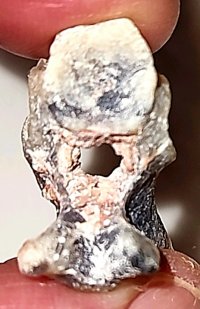 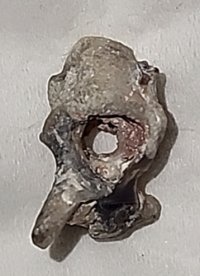 At day's end I washed and re-bagged the rest of the pieces, about 20 all up, and decided to have a better look. Previous experiences have taught me to look very carefully at everything, just in case something has been missed.
(for example: https://www.abc.net.au/news/2020-11...ced-a-new-species-from-the-deep-past/12798212)

I regret to say that I did not have the presence of mind to take "before" pics; all I can say is that I spotted a small piece of grey potch with some blue colour that had odd exterior sides and looked like a tiny bone fragment. The hairs stood up on the back of my neck when I saw a vague, elongated figure-8-shaped blob of sand, about 2-3mm wide and 7-8mm long.

VeryVERY carefully, with a needle and later a toothbrush, I removed the sand, thrilled to find that the sand went down and into the piece and were indeed clearly tooth sockets, but of what I didn't know, here, after cleaning: 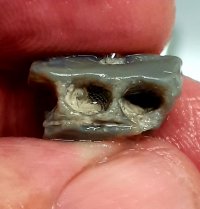 Imagine if you will those two hollows filled with and joined across by sand (host rock, opal clay) and you can envisage the elongated figure-8-shaped blob of sand described above. The other clue, of course, was the half-socket broken open at the left-hand end which reveals the tooth socket interior, nicely.
Thrilled, I sent off pics to an expert friend who has speculated that it's from a very small, young crocodile. The exterior sides show several holes and hollows which would have been neuro-vascular, some acting as sensors; very common in crocs, apparently: 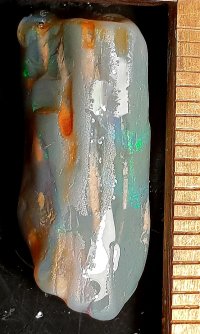 I was and still am very happy and thought that was the end of it, but curiosity made me look again the next day at another piece which I had dismissed at first as an unusual piece of opalised wood, with what I thought were stunted thorns, or broken branches. This piece: 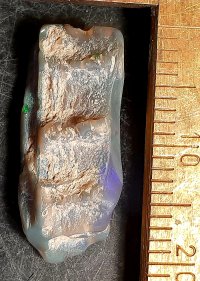 the obverse side of which is above.

I kept looking and wondering.
There was s-o-m-e-t-h-i-n-g odd about it.
Then the penny dropped and I rotated the piece 90-degrees, up.
Holey Moley, it's another piece of jawbone broken longitudinally, exposing the interior of 3 broken tooth sockets and needed to be viewed like this, vertically, not flat:

I cannot describe how happy I am to have found the two pieces, acquired by dumb luck, found by restless curiosity, [email protected]!
Crazy luck.

They appear to be from the same jawbone/animal, although not adjacent, as with the two fragments from Weewarrasaurus which had a piece missing, also:

It will take time and research to get them formally identified (Weewarrasaurus took 2 years!) and I doubt seriously that there's enough information there for definitive identification, anyway. I'll leave that up to Drs. Phil Bell (UNE, Armidale) and Elizabeth T. Smith (AOC/LR).

However, they exist and after I donate them to the AOC hopefully will add to what is known about Cretaceous crocodiles (Oooo, or maybe even a different critter?

My final thought is this: if you go to Lightning Ridge or somehow acquire a bag of junk-looking pieces of grey potch from there, please look again very carefully. Some little treasures have been missed quite often or ignored and are waiting to be discovered.
Last edited: Mar 25, 2022

VERY nice mementos of the trip.

Great finds and so easily overlooked!
Sadly, I'll bet there's been tons of similar material unwittingly discarded over the years. Your persistence certainly paid off this time, that's for sure - well done.

grubstake said:
Great finds and so easily overlooked!
Sadly, I'll bet there's been tons of similar material unwittingly discarded over the years. Your persistence certainly paid off this time, that's for sure - well done.

Grubstake, mate, thanks for your interest and reply.
You'd be amazed.
Opal miners in general are not looking for opalised fossils which are accidental finds, or "by-catch". There are some claims eg at EMU/ Allawah and Kellie's that produce a lot of opalised fossils , among the rarest of which are bones and/or teeth. In fact, many stop mining in a claim because "all" they're finding is fossilised material which does not justify their time, money and effort.
Paleontologists weep at such news.

Miners who've been mining for a while will all tell you that they used to pay little attention to opalised fossils, especially any without colour, and would leave them in the tailings or throw them in the silt!!
A lot of miners still do not rate them.
Many have been destroyed by rubbing, chasing colour, in the hope that there's a stone (= $s).
Many more would have been missed entirely because they are small, or broken, or do not look like opalised fossils to an unfamiliar eye. I have a very close friend in NY to whom I often send stories and photos about my opalised fossil finds:
1) she is very patient with me, not sharing the passion

and
2) often asks me how on Earth do I know what they are. Many just look like rocks to her.

I've been very lucky because over the years I've made good contacts with opal miners who have a really sharp eye for opalised fossils and find them fascinating, as I do

It involves a lot of sliding-door, accidental, right-place-right-time LUCK.