A friend asked me if I could do a few articles on some of the better "gemfields" we have visited over the years
and seeing Liz is more into the gems than the gold I couldn't say no . 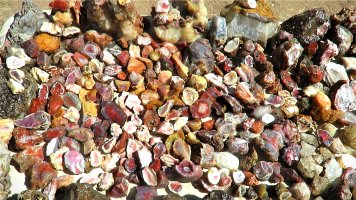 Typical of what is strewn all over the ground. Easy pick-up without digging.

I'll start off with one of our favourites, and that would have to be Agate Creek in northern Queensland. Known for
some of the highest quality Agates and Geodes in the world, it is a field quite often frequented by overseas gem
hunters and on our last visit it was a "Spot the Aussie" trip, as a gem club from Germany in a coaster bus took up camp adjacent to our little caravan

. Luckily, like fossickers all over the world, their presence proved to be rewarding, as we not only made a couple of life long friends, but also were invited to some crystal hunting in the Austrian Alps should we ever holiday in that part of the world. Only through "Fossicking" can such friendships be forged.

The closest major town to Agate Creek is Georgetown, and it is here that you can get your fossicking permit which is needed if you don't already posses one. From here you head south some 40ks to Forsayth which for those in the know is a very productive gold detecting area. A mate of mine stopped here for a week after Agate hunting and found 28 grams of very coarse nuggety gold, detecting on one of the pay to detect stations in the area. From here it is another 70ks on a pretty good gravel road to Agate Creek. The campground will be on your right and is the only camping permitted by the Robin Hood Station upon which the fossicking reserve is situated.

The campground although primitive, has a well maintained toilet block and a shower block, with hot water being obtained from a wood fired "donkey" and that's not the type that goes "eee, orrr" and walks on 4 legs . Wood is provided by the station owner and is always in good supply. Payment is via an honesty box at the entrance to the campground and is great value for what you get.

The Agate Field is basically a valley surrounded by Volcanic mountains from the Permian Age, with a creek running through the middle of it.."Agate Creek". Agates weathered from these volcanic mountains into the valley and were deposited in an unusual manner.
Certain areas within the volcanic mountain range held varying mineral groups, and distinct sections of the field had varying colours making up the agates within them. The main sub areas of interest were given names such as Crystal hill, Bald hill, Black soil creek, Sympsons, Flanagans, and Blue hills. Each area had different coloured agates and only a few of them had crystal filled Geodes, the best of which have some very impressive Amethyst crystals within them. These days the tracks to these areas are well signposted and easy to follow.

Just opposite the Campground is a range that has thousands of "Thunder Eggs", They look similar to Agates and are formed in the ash layers during the same period as the Agates, but unlike the Agates very rarely have banded interiors. We spent a day on top of that range breaking open several hundred of these Thunder Eggs to only find one with a solid interior. My suggestion if you want "Thunder Eggs", is don't bother with the ones here, and go to places like Mt Hay near Rockhampton, where much better quality eggs can be found.

All throughout this valley are thousands of smaller Agate slices just laying on top of the ground, and for the lapidary enthusiast, who wants cabbing material for making pendants and jewellery, this is the prettiest lolly shop they will ever visit. Many of the agate pieces have already been polished by mother nature and are so abundant that it's just a matter of bending down and picking them up by the handful. If you love gemstones like Liz does, this area is just paradise and hence we have been there on many occasions. I will include some of Liz's wire wrap pendants to show why many love what can be done with semi precious gemstones. 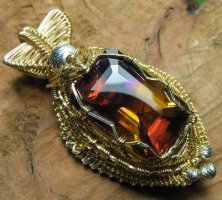 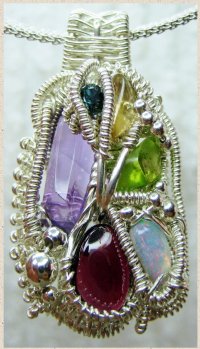 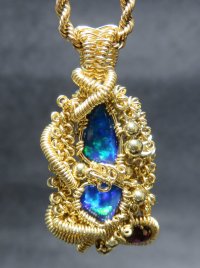 Some of Liz's Wire Wrapped Jewellery.

For the "Geode" collectors digging in the pits on Crystal Hill and Bald Hill will usually offer more than enough crystal specimens to keep even the enthusiasts happy. Our best Geodes have been found walking the foothills of the ranges, as these areas seem to get the least attention.
After the rains of the wet season the main creek and pretty well all of its small tributaries and gullies, always seem to replenish themselves and are certainly worth the walk along their banks.

There is only a basic set of tools needed for Agate hunting...A sturdy shovel, a pick, a short handled small metal rake, a pick like the ones used for nugget hunting, and a miners pick or hammer, to break open geodes......though the better geodes are best taken home and cut in half with a diamond saw. We take a small diamond saw with us that runs off the 2kva Honda generator, spending the evenings cutting Agates by the campfire and limiting ourselves to taking home only the best material. The only problem with doing this is the never ending line of fellow prospectors saying can you cut just one for me, and then it's just one more, and so it goes on.

The Field is doted with numerous shallow pits and diggings and for the newcomer this is where I would concentrate my efforts. The diggings are shallow and Agates continually fall out of the edges of these diggings, making it much easier than digging new pits. Robin Hood Station is a cattle station and the flats along Agate Creek are quite often covered in long grass. Cattle roam freely amongst this grass chewing it right down to its roots and in doing so, expose many agates that would be normally covered by the grass. They also kick up a lot of agates with their hooves, and following behind where the cattle have grazed has found us many easy to pick up Agates, which normally wouldn't be accessible.

For those wishing to go to Agate Creek I would definitely allow a week or so for your adventure, as the place is easy to fall in love with and the people you get to meet are just the salt of the earth, where everlasting friendships are forged, and memories never fade with time. Happy hunting.
Last edited: Aug 3, 2022

Awesome write up! Thanks for sharing, Wal n Liz.
B

Thanks Wal n Liz, what a great summary of the place.
Love the YouTube videos you do, as well. Always entertaining

Thanks mate...Liz has been saying we should get back into doing more vids as It's been a while since we filmed our prospecting adventures. Will have to see if we can make the time on some of our future trips.
H

WalnLiz said:
Thanks mate...Liz has been saying we should get back into doing more vids as It's been a while since we filmed our prospecting adventures. Will have to see if we can make the time on some of our future trips.
Click to expand...

You can also link across from the WalnLiz channel to our other channel Liz Kreate.
H

How good are our fancy new metal detectors?