Location
The back track

A few scraps from Creswick today

One foot out the door

Location
West of the Yarra, East of SA,

Gotta be happy with the number, has to be a bigger one out there with your name on it. 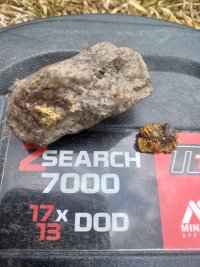 A mate and I went out for a swing yesterday with the 6k’s. We had the standard coil on one machine and the Coiltek Gold Hawke 10x5 on the other. We were both running in difficult and sensitivity 3. A decision was made to mark any targets and then compare the coils response before the targets were dug. Damp ground was going to cause a few issues, especially in the mineralised sections of the gully. My mate called me after about an hour and said that he had 3 targets marked. I had no signals to report at that time. When we ran the coils over the first target we agreed that both responded well with the 11” standard coil giving a smooth but rounded response while the 10x5 gave a sharp, slightly louder signal. A small scrap of gold was recovered from a depth of about 2”. The second target was not as strong as the 1st but the coil results reflected what had previously happened. A small shard of steel was the prize.The third target sounded very much like the first with both coils giving a similar signal. It was in dark soil and turned out to be ground noise. I eventually got a signal further down the gully and called my mate on the radio. Both coils picked up the target but the Coiltek was considerably louder this time. It turned out to be a shotty piece of small gold. We continued detecting and eventually I got a small signal on an old classified pile on top of a mullock heap. My mate was well up the gully so the small nugget was recovered without comparison. Two more pieces were pulled from this small, flat pile of classified gravel. Twenty minutes was spent on an area that was about 1.5m x 1.5m trying to squeeze another piece out of the pile. No more signals came through. As the spoil pile was predominately gravel, I decided to crank the 6k up to auto plus with threshold on. Another faint signal came through in that small area that I was detecting. When I went back to sensitivity 3, no signal could be heard. Was pretty impressed with the depth that the small nugget came from. I measured the hole at 7 1/2”. As I was interested in the depth capabilities of the coil, I checked the hole with the detector after every 1/2” scrape with the pick. The nugget came out in the last scratch so I can confidently say that the gold was over 6” down. 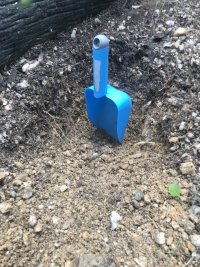 As you can see from the photo, the gravel/ clay mix was fairly benign allowing full sensitivity to be used. Another nugget from depth was recovered within a couple of minutes and finally one more faint signal was detected with the 10x5. Called my mate down and he also put his machine into Auto plus. This time the 11” coil gave a slightly better response than the smaller coil. We switched between machines a couple of times before digging the target. An interesting point to note was when threshold was turned off in auto plus. No signal came through the detector at all. The subtle variation in the audible threshold tone was not enough to trigger a response from the detector. As you would expect, the piece of gold was quite small and taken from reasonable depth. It was getting late so in one final effort, I scraped away the pile while my mate detected using the Coiltek coil. One more really small piece was recovered. There was not much size to it at all. 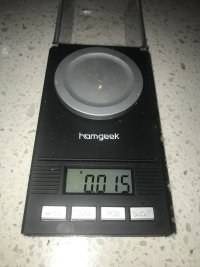 It turned out to be an enjoyable afternoon with a little bit of really small gold rattling in the jar. 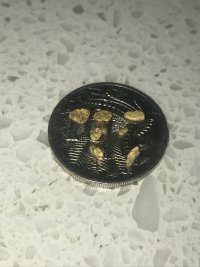 Comparing the coils was good fun with both of them doing a pretty good job. The Coiltek 10x5 worked well in the heavily overgrown country and really stood up well compared to the standard coil. It’s sharp response and good depth was impressive. The pinpointing on the elliptical coil was also brilliant. Perhaps the coil should have been called a Gold Pan instead of Gold Hawke. It really does hit hard on the micro bits.

davent I'd love to see that bigger piece after a soaking, me like.. well done mate

Lol, it had 2 small nuggets in it that are now very flat and thin.....

Long time between posts, Picked up this 7g nugget with the 6k from an old patch.
Thought I had cleared this out with the Zed but managed this one and 4 other sub grammers in a short couple hour session.

davent said:
Lol, it had 2 small nuggets in it that are now very flat and thin.....
Click to expand...

Noice Jay and at a decent depth too.

This morning I went out to where Mrs M found the barrel band and a few bits yesterday. 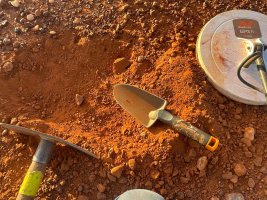 It's vacant crown land but looked like it should have gold. This is 0.07g but it is gold 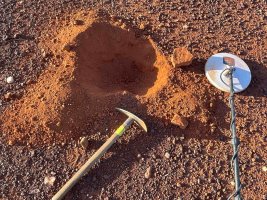 We lit a fire out the back and broke the speci down. 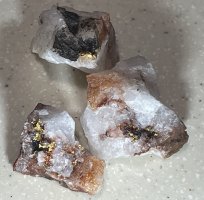 Just fragments but we have a few small ones and they'll all go into the caustic soda and hopefully come out looking good.

Got a screaming signal on a vertical bank in a gully yesterday. When I looked to see where I should start digging, this is what was shining back at me. 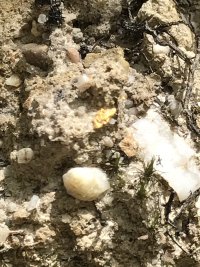 Went out with a mate today for a swing using the 6k’s. We found some small bits but also took a bit of footage to send to a mate in relation to the performance of the Coiltek 10x5 compared to the standard coil on really small gold. It is particularly good on the small stuff. Camera work is poor but it is what it is. Had to trim the clip right down to get it to upload but you may get some idea as to how this coil performs. We had this situation arise about three times Today.
View attachment IMG_4724.MOV

Just cleaned up the little scraps that I found yesterday. Not a lot of weight but definitely heaps of fun. 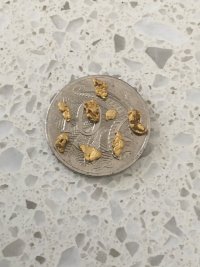 Here are two of the nicest bits for the season, biggest is 5.5 oz (171.2g) and the other is just over an ounce (35.5g). Both found with a 6000 while pushing. Interestingly the big bit was laying flat, in a crevice in a rock bar, about 60 cm down I suppose (from the bottom of the push) but it was not an inverted signal, and I have no idea why. Every other solid bit I've got from a gram or so up has been an inverted signal.

It started off as a normal up down signal, sounded very OK like a few gram specie 10 inches or so down, good but not outstanding. It just got louder and louder the deeper I got. By about 40-50 cm down I knew it was going to be a better bit, maybe an ounce or two even, and I was convinced that it had to be a specie as the signal wasn't inverted. The pinpointer was going crazy over a red rock stuck in the crack and I couldn't see any gold yet so I was convinced it was under the rock, got the biggest shock when I got that rock out and felt the weight. It was flat and heavy and clearly a nugget but even after giving it a wash I still couldn't see any gold. Took a couple of days in alibright for the red coating to dissolve. It has about 6 g of rock in it based on an SG test so it's technically a specie but I'm happy to call it a nugget.

The smaller bit was in a different spot, in old wash, probably 70 cm or so down from the surface. I had pushed it though so I only had to dig a few inches. Before I dug it I tried detecting it from the surface level and got no response. Had to be down another 6 inches or so before any signal but it was inverted all the way. The bit was in a small crack but standing upright on it's side and it looked bright and shiny like it does now when it was still stuck in the hole. 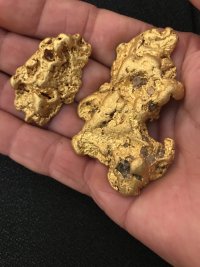 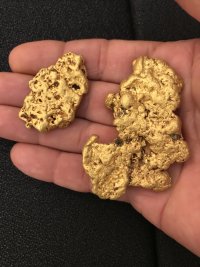 Stringray, that make mine look like a feeble effort but I came home happy. 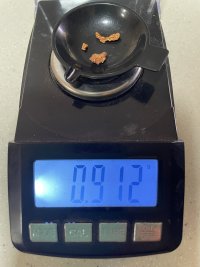 Mrs M is not working today so when she's having a sleep in I try to keep quiet. I tried to lie in for a while but gave up and went out for an hour while I was waiting for the post office to open. This came from the new spot where I got the speci the other day so it deserves a bit more attention when I get the time.

Maybe it's just my overactive imagination, but Stingray's magnificent chunk above seems to have two faces embedded in it! 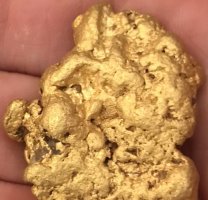 And facing right, an elderly gentleman with no teeth (or maybe it's a gargoyle!): 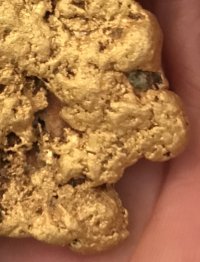 A fantastic find, that's for sure.

I agree with your old man looking for his dentures on the bottom one, but the top one looks like a comic image of Bob Hawke! Awesome gold whichever way you look at it.

Do puddlers provide useful information for gold detecting (probably not)?